10 React Boilerplates You Should Not Miss in 2022 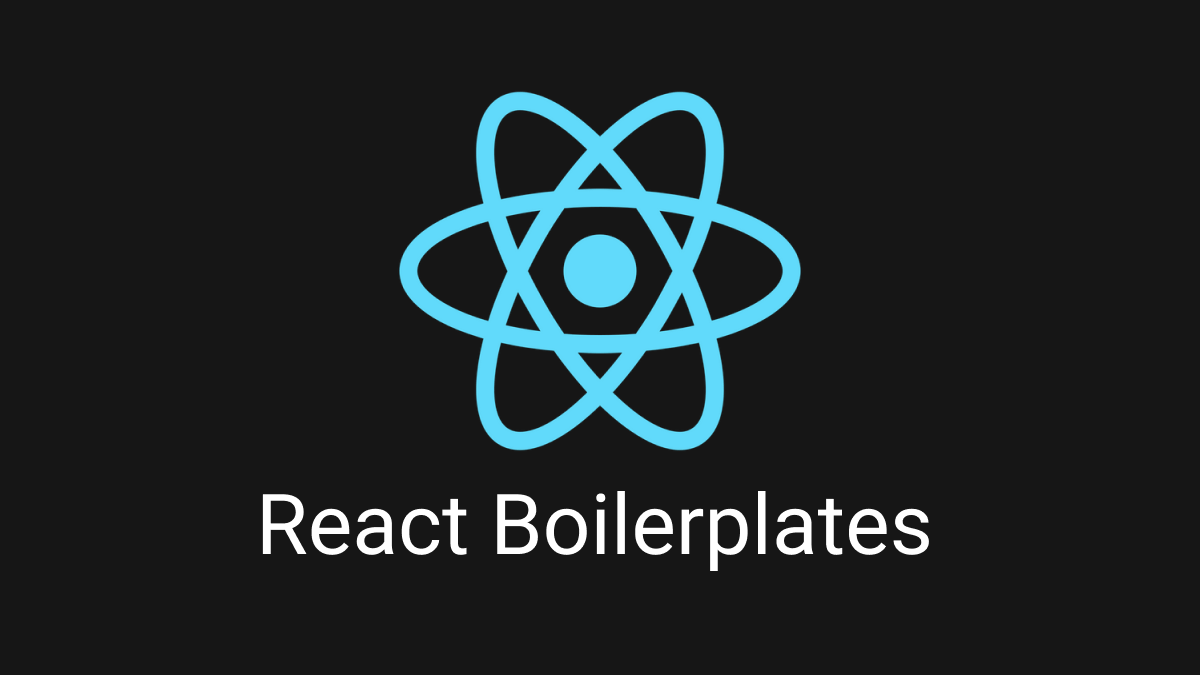 Are you looking for React boilerplates? You’ll find all the great ones here. In this blog, we will learn and find out all the major React boilerplates that you should not miss in 2022. But first, for those who are unfamiliar with boilerplates, let us clarify a few points before diving into the best ones.

What is a boilerplate?

A boilerplate has nothing to do with a boiler or plate. Rather, it is a chunk of code that we can reuse a lot of times to repeat the process in particular sections. According to Wikipedia, “boilerplate is a section of code that is used interchangeably to provide this or that function”. Since developers go through a lot of code writing, boilerplate code saves their time and gives comfort.

To reap the benefits of a boilerplate, clone it in Git for your project’s needs. After that, use a hot reloading function to refresh code changes.

These are not well-defined terms. These terms are frequently used interchangeably. However, in our opinion, the Starter Kit is a larger package that is used only once per project, similar to the code generated by create-react-app. Whereas boilerplate is used for smaller tasks such as the files we create for a single redux action or component.

Because developers’ preferences differ, there is no such thing as the best react boilerplate. You may have them based on their popularity but not any other way. Each boilerplate is useful for resolving various tasks. The topic is very similar to asking anyone which JS library is best for front-end development. React developers would vote for React, and Vue developers would defend Vue. Simple as that.

The most important benefits of using boilerplates are time savings and a short learning curve. Simply incorporating a code template rather than writing everything from scratch saves time. Furthermore, thanks to a specific frame scaffolding code, the designer may be able to see the code more clearly in the future.

However, every good thing has a drawback, so be aware that the downside of ready-made coding tools may be additional code maintenance and the need to navigate someone else’s code. Also, boilerplate commands may dump configuration information in the form of code. You’ll have to manually resolve bug lists, clean up a lot of code, and update the dependencies from the original repository.

When to use React boilerplate?

The use of React boilerplate depends on the size of your project. It is best to use boilerplates for light and responsive web apps. For long-term and time-consuming sites, it’s better to put effort into deep learning, DevOps toolchain, etc.

To be honest, there are a couple of hundred React boilerplates available on GitHub. So, for choosing a particular one or a few, you need to have a clear goal. For example, you will build an app using React, TypeScript, Redux, etc.

Gatsby is a fantastic boilerplate for building static websites or apps in React.js that are optimized for speed. It’s the ideal open-source framework for creating, say, a company’s e-commerce store. It has a starter kit gallery and provides the fastest outputs pre-rendered HTML and CSS to ensure the quickest load time. Learn about Gatsby with the official guide and a gallery of starter kits.

React Redux Universal is a boilerplate that includes react-router, redux, saga, webpack 3, jest with coverage, and enzyme. Its functionality allows you to perform actions on both the server and client sides. Redux eliminates boilerplate code and enables hot–reloading in the first place. Redux is suitable for multiple UI layers and has a robust ecosystem of addons to choose from.

To begin with, the Electron boilerplate has multiple entry points and a well-deserved reputation among coders, with 18.7k stars on GitHub. The three pillars of this boilerplate are hot reloading, incremental typing, and high code performance. Second, Electron allows you to switch between apps without having to refresh the page. It is compatible with electron-builder, TypeScript, eslint, webpack, and Babel.

One more efficient tool to equip your React app is react-slingshot. It is a starter kit / boilerplate with Babel, hot reloading, testing, lining, and a working example app built-in. Its advantages are the only npm start command to get started through any modern browser. It works with a bunch of common technologies like SASS, ESLint, React, Redux, React Router, and others. Make the fast and highly automated production build – by typing npm run build. Available for macOS, Linux, and Windows as well. Currently, it has 9.8k GitHub stars.

Every large JavaScript web app requires a common foundation: a configuration to build, run, test, and lint your code. kyt is a toolkit that encapsulates and manages web app configuration. kyt has a wide range of applications in programming and can be used as a dependency in any project. It’s a useful tool for creating dynamic web applications in Node.js.

With 28.2k stars on GitHub, React boilerplate is a solid and well-thought-out boilerplate in the Javascript UI Libraries. What’s on the inside? Redux, Mocha, Redux-Saga, Jest, React Router, PostCSS, reselect, some code generation scripts, and the super-rich component and font base are all included. They even allow for SEO indexing! That is more than enough to focus on app development and performance.

Razzle boilerplate is a tool that abstracts all of the complex configurations required to build single-page apps and server-side rendering apps into a single dependency. It has the same CSS setup as create-react-app and supports React, Preact, Reason-React, Vue, and Angular. While your app is running, type rs and press enter in the terminal to restart your server. Get started with Razzle right away.

Neutrino allows you to create js web apps without the need for an initial configuration file. It is frequently used as a helper in the development of various React and Node.js projects. Neutrino allows you to test, lint, and develop js projects using shared configuration presets and middleware. It is compatible with Jest and Karma for testing, ESLing for fine-tuning linting, various CLI tools, and other tools.

With 2k GitHub stars and over 350 forks, this boilerplate is one of the best chrome extension boilerplates for Reactjs projects. You’ll see a live example of this boilerplate from the link below. Webpack and react-transform are used in this boilerplate, as well as Redux. You can perform a hot reload by editing the Popup & Window & Inject page’s related files.

webpack-react-boilerplate is a React 16 and Webpack 4 boilerplate that uses babel 7. It utilizes the new webpack-dev-server, the react-hot-loader, and CSS-Modules. It is using the most recent versions of React, babel, jest, and enzyme. Click to see real-time server changes and also for more information on the technologies used.

Finally, it looks like your search for some good React boilerplates has come to an end. Choosing the right React boilerplate is very important. It is essential to choose the right one especially for scaling, maintaining the app or website in the future, setting up the configurations, and so on.

We wish you the best of luck with your next React-based project. Thank you for joining us!